[Updated 1 August 2022] The PSE Brute Force Compound Bow is a fantastic bow that has earned rave reviews from numerous shooters. It’s not the quickest bow on the market, but it has a silky smooth draw and dead-on accuracy for the price. It has a lot of adjustment options, and even the most experienced archers may use it. 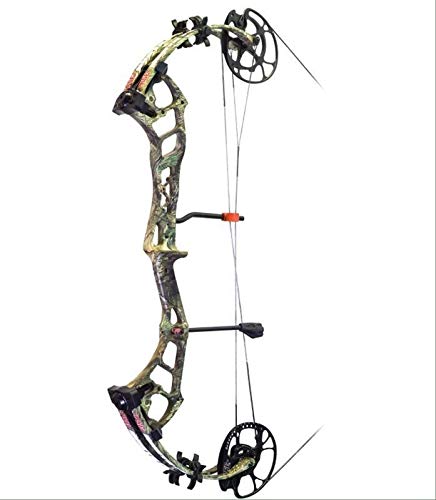 What springs to mind when you hear the term “brute”? I see a burly, bearded guy who doesn’t take criticism from anybody. He solves issues without speaking, and the poor opponent has zero chance of winning. When PSE referred to their bow like the PSE Brute Force Compound Bow, they were definitely expressing a sentiment. The bow is a potent hard hitter that delivers a wallop.

This PSE Brute Force Compound Bow’s riser is machined aluminum. Aluminum is now the most popular material for bows, with many of them made from aircraft-grade aluminum. Aluminum is the best material since there’s really no competition when it comes to weight, strength, and price. The riser is perfectly adequate if you’re not worried about bow weight (i.e., you want a bow weighing in at around 3 pounds).

Like many others nowadays, the riser is drilled and tapped to fit a wide range of attachments. If you don’t get the package bow, stabilizers, quivers, and sights can be easily added. The ability to personalize your bow is a must-have for most archers.

A standard cable slide is used in this bow. The PSE Brute Force Compound Bow does make an improved cable slide that flexes to avoid bow torque. However, the Brute Force they do not include this functionality. It has a similarly stiff cable slide to other bows in its price range. You won’t even notice this feature unless you’re a top-level tournament shooter or just want the most cutting-edge technology.

The grip on this bow is one of the most noticeable features. It’s a little grip, and the shooter just grips the riser. Hand placement is comfortable when you have a skinny grip. Smaller grips will generally provide lesser hand torque because less of the hand is touching the riser. This is an excellent feature if you’re looking for a pleasant bow to grip.

Another disadvantage of gripping the riser is that the aluminum becomes cold if the temperature drops. They do now produce shooting gloves that may offer some insulation, so this isn’t necessarily an issue.

One of the most interesting features of this bow is its cams. PSE Brute Force Compound Bow used the same cams on their Bow Madness bows, so they decided to go all out. The Bow Madness is a well-known and highly regarded PSE bow especially popular among serious hunters. Engineers used a system with two cams. The cams must be synchronized using a dual cam system. There isn’t much maintenance to perform these days, but they require more frequent inspection. If you prefer a straightforward design, this probably isn’t your bow.

What do dual cams bows have to offer? Double cam bows are thought to be more pleasant to shoot and have a rock-solid back wall. Those who shoot with back tension may benefit from a solid rear wall. If you’re searching for a bow that stays in place when drawn to full draw, this one’s for you.

Finally, these cams come with built-in modules that allow for simple draw length adjustments without the need for a bow press. You may adjust the draw length from 25″ to 31″ simply by changing the module settings. Long-armed individuals may appreciate the extra 31″ inch draw, as it is not always simple to locate one.

The PSE Brute Force Compound Bow is built with split limb technology. They have three different maximum-weight versions. You can select from #50, #60, or #70 maximum weight on your limbs. Although the limbs indicate these weights, they do have a weight range of 20 pounds. The limb bolts are twisted out to make the adjustment. The bottom line is that the 70-pound limbs can actually fulfill the demands of a person wanting a 50-pound bow. This would be especially beneficial to a new shooter who wants to practice with a lighter draw weight but still wants more power while hunting. It also implies that a young archer may buy the 50-pound limbs and make the bow lighter by 30 pounds. A 50-pound bow is permitted for many commonly hunted species, so a young adolescent could hunt with this bow for years.

The Brute Force is a force to be reckoned with when it comes to aesthetics. The riser has a traditional cutout design that is very popular now. There are a variety of colors to select from, including Mossy Oak camo, Skullworks 2 camo, and black. Personal preferences should determine which color you choose. The PSE process has been figured out, and you can expect this finish to last a long time.

PSE’s bows tend to bear the company’s name. The bow is no exception. On the limbs, cams, and riser, PSE is stamped. It does not distracted from the complete look of the bow, but it is there.

The PSE Brute Force Compound Bow shines in this area. The smooth draw on this hunting bow is simply praised by everyone who has ever shot it. The bow offers this smooth draw due to the Bow Madness cam system. The cams will finally tip over to an 80% let-off at the final two inches, with a comfortable draw until there. The question is, what shooter would not benefit from a bow with a smooth draw?

The solid back wall and almost no creep provided by the twin cams of this bow are illustrated. It’s easier to concentrate on what’s most essential when you can sit back at full draw. This bow is perfect for anybody looking to get really accurate.

The final feature is the noise and vibration of this bow. The noise level is as low as you’d expect from PSE, and the vibration doesn’t appear to be an issue.

All things considered, this bow is a pure joy to shoot. If you’re finding for a way to increase your comfort level, take a closer look at it.

How does it compare?

The Bowtech Carbon Knight is a serious bow for serious archers, much like the PSE Brute Force. They’re both powerful and have comparable performance, selling features, and advantages. The weight of the Knight bow is its greatest benefit over the PSE Brute Force Compound Bow. A carbon riser was used to make this bow by Bowtech. There are several advantages to carbon over aluminum. The Carbon Knight is also lighter, weighing in at only 3.2 pounds. Second, unlike an aluminum riser, it does not retain the cold. This feature may be particularly useful to people who frequently shoot in the winter.

The Carbon Knight does not have the same draw length range as the Brute, with lengths ranging from 26.5″ to 30.5″.

The Edge Pro is comparable to the Infinite Edge in that it may be adjusted significantly. As a second-generation bow, it has greater adjustability and shooter friendliness than other comparable bows. This bow adjusts from 13″ to 31″ inches, so it’ll fit those who require more inches. It also has a similar 80% let off to the Brute Force. The Edge Pro is a great bow, although it does not shoot as well as the PSE Brute Force Compound Bow.

The SAS Outrage is a dream come true for bargain hunters. It’s a great deal more affordable than some competitors, and it provides enough performance. The Outrage comes with an adjustable draw weight from 55 to 70 pounds and a draw weight adjuster of 26″ -30″. The Outrage features a longer axle-to-axle measurement than the Brute Force, which may be beneficial for novice shooters. The Outrage’s arrow speed isn’t as fast as the Brute Force’s, but it is enough to take down common deer and turkey. If you’re looking for a long-lasting, sturdy bow for a low price, it’s worth taking a closer look.

As you can see, the Brute Force is a higher-performing bow than the Diamond Infinite Edge. The Infinite Edge features a slower rate of fire, but it still shoots at 310 fps. Plus, it has a reputation for being less smooth than the Brute. The Infinite Edge’s adjustability is one of its most prominent features. Adjustable draw weight ranges from 5 pounds to 70 pounds with this lovely little bow. The draw lengths can range from 13″ to 30″. That’s why this is such an excellent bow for both growing children and adult archers.

PSE Archery is the most well-known brand of archery equipment currently sold in the United States. The PSE is a US firm started by a product engineer with interest in archery who was looking for better equipment. The PSE was one of the first businesses to machine bow risers and accessories from solid aluminum, and it developed the four-stage forging process for lightweight yet strong bows.